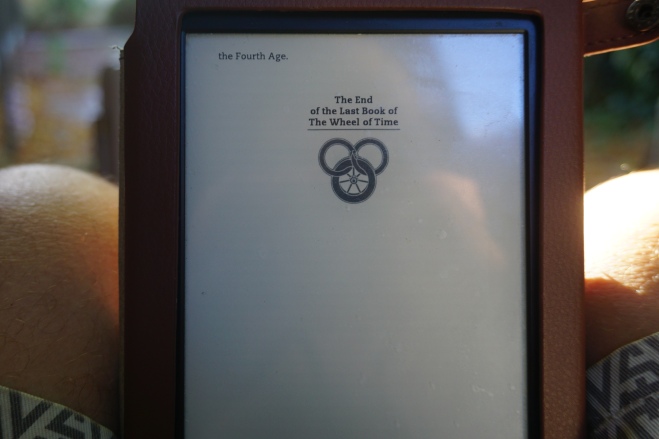 It’s time I wrote something for the new year. But the thing is, what have I done so far?

I then hit a lull. After spending countless hours in front of my computer typing, and constantly thinking about the story and it’s world even when I wasn’t in front of the computer, it was a void. I had no project to fill it with, and the idea of starting a new story all over again wasn’t appealing without some kind of a break.

Whilst I had been reading in between writing sessions, I wanted to get lost in someone else’s world for a while. I’d done some research into editing, and a lot of advice was to set what I’d written aside and go back to edit it with fresh eyes in a few months. It being December, I needed something to hold me until at least mid February or March.

I could have picked up a new series, but I wanted to read something familiar, so I could learn about technique instead of rushing through it to see how it ended. That’s how I like to read. I get caught up in a story and I read it to the exclusion of, well, nearly everything. I’ll be antisocial and choose to read a book in the backyard, catching the afternoon sun with a few beers and a pouch of tobacco, instead of getting in touch with someone and hanging out. If it’s a good book anyway.

Naturally, I cast my mind back to favourite books and series. Abercrombie, Hearn, and Martin. Rothfuss, Rice, and Rowling. There were plenty of series I could dive into, but I needed something to really lose myself in. And I wanted a completed series. As much as I love Rothfuss and I want him to make the best book he can, I don’t want to torment myself with another re-read knowing I’ve still got to wait another year or longer before the next book comes out. Plus, I needed something big. There’s no way the 2 books in the King Killer Chronicle would take me a few months to read.

So I turned to Robert Jordan, and decided to re-read the Wheel of Time.

I began reading it on the 12th of December. The intention was to read it slowly, to learn his technique. Maybe I should have chosen an author with less purple prose, as I tend to ramble as it is, but on re-reading this series again it doesn’t seem as bad as I remember.  Oh I’m not saying he couldn’t have trimmed it a bit, book 10 and its slow, tedious plot comes to mind, but I remember the series being much more draining in the past. Like all good books there were moments when I couldn’t put the fucking thing down.

Unlike George R R Martin, where you begin reading about a new character only to have them get killed once you begin to like them, Jordan knows how to draw this out much better. When Jordan changes point of view it’s often to a side character I’ve already read about. I’ve formed an opinion about who theis character is, and then I get to see inside their head and find out what their actual motivations are.

Martin will instead just throw you into another part of the land, for a single chapter, and make you drudge through a couple of hundred pages of bullshit you don’t care about. By the time you begin to form an opinion, understand their motivation, and like the character, he is deciding to “unexpectedly” kill them. As a reader, this is frustrating and tedious, as now when a new point of view begins in a distant land I just don’t care anymore, I want to solve the main plot thread.

Jordan isn’t faultless of course. Far from it. But I’m finding a lot of humour throughout the books with characters I once found somewhat frustrating. Each characters ability to deceive themselves is great, and I think the slow pacing really draws me into the world because of it.

But this isn’t a book review. This is a blog post.

I realised about mid January, 4 or 5 weeks after I’d finished writing for Nanowrimo, that as much as I wanted to edit my own book, I kind of couldn’t until I’d finished reading the Wheel of Time. I was too deep in the world. I’m a monogamous book reader; I spend my time with one person before I step into another authors world.

It’s how I approach all of my major projects too, one at a time. Oh sure, I’ll have side quests. I’ll play some music and work on some songs or jam with friends. I’m always reading, even if it is sometimes just Reddit and hunting for dank memes. But I like to have one main project or challenge going at a time that I’m really focussing on.

In this case, it was reading all 14  books of The Wheel of Time (I skipped the prequel this time), with a total of 11,582 pages and 4,287,886 words (not counting the prequel). The audio book goes for 19 days, whilst the series took almost 23 years to write, with Robert Jordan dying before he could finish it. It’s a quite monumental series, and I wanted to give it my full attention seeing as it was one man’s life work.

By the start of February, I began to realise that this was now a challenge. I wanted to have the whole series read by the start of March. By February 7th, I was up to book 9. Summer was in full swing, and most days were hovering around a lazy 30 degrees or so. Perfect weather to go down to the beach. To get out, drink beers in the sun and socialise, maybe try and meet a girl for the summer like Bernard in Black Books. To play music and ride my bike out and see gigs on warm nights.

Instead, I sat around and read an epic 14 book series.

I think that’s what this blog post is about in some ways. Choosing priorities.

Am I trying to justify sitting in the backyard for hours on end reading a book? Probably. It sounds quite idealistic doesn’t it? Sitting in the sun enjoying a few cold beverages whilst reading. But at a certain point the challenge took over, and I began to read to the exclusion of all other entertainment. I wanted to watch Black Mirror, but couldn’t justify spending an hour not reading. If I was out with friends, I’d almost feel guilty if I was still out and having fun after a few hours had passed. I still played music, indeed I made sure I did something musical for at least an hour every day to keep my skills up, but apart from that my life revolved around reading these books.

On the 27th of February I accepted I was going to fail the challenge. I found myself awake at 8:30 AM and up to the final book. The book was over 900 pages long, and whilst I could have done it in 2 days, I began to question my challenge.

My original intention hadn’t been to read the series as fast as I could. It was to get lost in the world and notice different techniques about writing. As I said earlier, Robert Jordan died before he could finish the series. Another author, Brandon Sanderson, came in and finished the last book, but it was such a large tome it got split into 3 books. The first time I read the series, I couldn’t fault it. I didn’t notice much of a difference between the writers, probably because I was just hanging to see how the series finished.

This time around, I began to notice the differences between the two writers. Whilst Jordan left copious notes and whole chapters were written before his death, Sanderson still had to do a lot of work. I’m really happy he did come and finish the series, I wanted to know how it ended. I couldn’t help but notice the differences in pacing and some of the characters though, particularly one of my favourites called Mat. The characters actions were right, but the humour was off. There were chapters in those last few books that I had to stop reading and critique what I’d read. Not because I wanted to find faults in Sanderson’s work, but because I was trying to understand the differences in technique.

In the end, I think I actually gained quite a lot out of re-reading this series because of the change in authors. It was unintentional, I like to get wrapped up in a story and not stop to think about technique or the mechanics of writing. But the way some of it jarred forced me to read those last few books a bit slower.

But not really that much slower, due to Sanderson’s pacing. It’s fine for me to intend to read something slow, but his pacing is much better than Jordan’s. It has the page turning quality that I seek out in books. Chapter 37 of the last book was over 200 pages long. That’s the kind of chapter you’re meant to read in one sitting, so that when things happen it’s chaotic and has a major impact on the experience. It’s essentially what the entire series has been leading up to, and you don’t sit down and analyse something you’ve been building up to for 3 months. You get lost in the experience of the entire thing.

And so it came to be that on the first day of Autumn, around 7PM, I finished reading the Wheel of Time. 79 days it took me from start to finish. Some of those days were utter bliss. Others, the struggle was real. I sacrificed socialising with my friends at times, I was rude and ignored my family at others. In the last couple of weeks I chose to stay at home instead of going to work so that I had more time to read, and consequently I now have to work like crazy for a while to catch up. But I think it was worth it.

As a challenge, it was deludedly selfish and at times hedonistic. I gained nothing as far as practical life skills go and I went through an entire season being a sponge and hardly creating anything musically, visually or textually. I bailed on half arsed Tinder dates and opted to read instead.

But it was worth it, so that on the 2nd of March, I could begin reading this guilt free.

One last thing. There was feels.

3 thoughts on “Tis the season to be reading…”